At the Second China-Eurasia Economic Development and Cooperation Forum

Your Excellency President of the Maldives Mohammed Waheed Hassan,

It gives me great pleasure to join you at the Second China-Eurasia Expo in the beautiful city of Urumqi. Today, nearly 90 leaders and senior officials from Eurasian countries and international organizations and more than 1,000 Chinese and foreign entrepreneurs are gathered here at the Opening Session of the Expo. This fully testifies to the good wishes of countries in the region to increase understanding, expand exchanges and deepen cooperation. Let me extend, on behalf of the Chinese government, warm congratulations on the opening of the Expo and the Forum, and sincere welcome to all the guests who have come from afar. I also wish to pay high tribute to people from all sectors who have been dedicated to the friendship and cooperation between China and other Eurasian countries.

Eurasia is a beautiful and magical land. With abundant resources, a variety of landforms, diverse ethnic groups and pluralistic cultures, this land beams with vigor and vitality. It was likened to the broad chest of Mother Earth in ancient Greek myths. As early as over 2,000 years ago, our ancestors, conquering mountains and valleys, traversing deserts and grasslands and sailing seas and oceans, opened the Silk Road that connected both ends of the Eurasian continent and served as a bridge for interactions between the East and West. Along this ancient road, flows of goods, including silk, porcelain, tea, gemstone and fine horses were traded; craftsmen left myriads of art treasures and majestic architecture. Much has happened along this road, and Hiuen Tsang's journey to the west for Buddhist scriptures and Macro Polo's trip to China have become widely told stories of friendly exchanges among the Eurasian countries.

Today, as world political multi-polarity and economic globalization gather momentum, Eurasian countries have strived to seize historical opportunities and achieve prosperity with hard efforts. Their mutual political trust has deepened, trade and investment have rapidly expanded, regional and sub-regional cooperation has flourished, and the influence of the Shanghai Cooperation Organization (SCO), the Arab League, the Cooperation Council for the Arab States of the Gulf (GCC) and the South Asian Association for Regional Cooperation (SAARC) has been on the rise. The ancient Silk Road has regained its past vigor and vitality. A number of developing countries have fast risen and become an important emerging force on the international stage, fundamentally changing the world political and economic landscapes. Central Asia, West Asia, South Asia and Central and Eastern Europe have displayed great vitality and potential for development. After I became Chinese Premier, I visited quite a few Eurasian countries, and I have seen for myself their rapid change and progress. The 21st century, a century of major development and major adjustments in the international architecture, will also be a century of major development and cooperation of the Eurasian countries.

China has entered the best time in history in its relations with Eurasian countries and is embracing a new height of cooperation for mutual benefit. We have established good-neighborly and cooperative relations with Central Asian countries and successfully settled the historical legacy of boundary issues. Since its inception 11 years ago, the SCO, with a growing number of members, observers and dialogue partners, has carried out productive economic and security cooperation. We have established the China-Arab States Cooperation Forum with West Asian countries and strategic dialogue with the GCC. We have forged strategic and cooperative partnerships with India, Pakistan and Afghanistan. China and the central and East European countries have held two sessions of the Economic and Trade Forum. Over the past ten years, China' s trade with countries in Central Asia, West Asia and South Asia has surged from 25.4 billion U.S. dollars to over 370 billion U.S. dollars, growing at an average annual rate of 30.8 percent. Chinese companies have made direct investment worth 250 billion U.S. dollars in Eurasian countries and signed project contracts worth about 470 billion U.S. dollars. West and Central Asian countries are China' s most important partners for energy cooperation. Our cooperation in this field has expanded from simple import and procurement to both upstream and downstream sectors covering design, prospecting, refining, processing, storage, transport and maintenance. Construction of the grand Eurasia passage is speeding up. The China-Kazakhstan oil and gas pipelines have started operation. The second cross-border railway between China and Kazakhstan has been successfully linked up. The China-Kyrgyzstan-Uzbekistan highway will be soon launched in full. A multi-dimensional silk road consisting of roads, railways, air flights, communications and oil and gas pipelines is taking shape.

The development of Eurasian countries and their growing ties have brought not only tangible benefits to people of all countries, but also peace and stability to the world. What has happened shows that as long as we, the Eurasian countries, embrace sincere cooperation on the basis of mutual respect, mutual trust, and mutual accommodation, we are fully capable of taking destiny in our own hands and achieving development and rejuvenation.

As our world undergoes profound and complex historic changes, Eurasian countries face both rare opportunities of development and many severe challenges. In particular, the international financial crisis has persisted for four years and world economic recovery remains hard and tortuous. This has caused Eurasian countries difficulties in economic and social development to varying degrees. And we face the pressing and daunting task of boosting growth, getting rid of poverty and improving people's life. We should, with stronger resolve and more practical measures, expand win-win cooperation in all fields and unleash the development energy in the region in order to bring benefit to the people of all Eurasian countries.

First, we need to enhance political trust to safeguard regional peace and stability. The Eurasian continent suffered greatly from the scourge of war in history and thus values peace more than anyone else. Nothing could be achieved without a peaceful and stable environment. China believes that regional affairs should be determined by countries and people of this region and supports them in pursuing development paths suited to their national conditions. We maintain that all parties should abide by the purpose and principles of the UN Charter, and resolve disputes and conflicts through dialogue and consultations. We oppose intervention from the outside. We should increase communications and coordination and make unswerving efforts to safeguard regional peace and stability.

Second, we need to open our markets wider to promote common development. The Eurasian continent is one of the most promising regions in the world in terms of consumption and investment. As long as we open our markets to each other and draw on each other's strengths, we can develop long and stable cooperation. We should deepen cooperation in customs, quality inspection, e-commerce, transit transport, standard certification and intellectual property rights, facilitate free flow of personnel, goods, capital, technology and services within the region, and jointly resist trade protectionism. We should improve existing regional and sub-regional cooperation mechanisms and build closer economic and trade arrangements at a faster pace, including negotiating bilateral and multilateral free trade agreements. We should protect the legal rights of enterprises and boost the confidence of investors. We should deepen financial cooperation and provide financial guarantee for major cooperation projects. We should, in a spirit of solidarity and mutual support, provide necessary financial, technological and personnel assistance to countries with economic difficulties in the region to help raise their capability for self-development. Our cooperation projects should be more oriented toward the well-being of the people so that more people can share the fruits of the regional economic cooperation.

Third, we need to advance cooperation in cross-border infrastructure to accelerate the connectivity progress. Sound infrastructure can promote people-to-people exchanges and help drive economic cooperation and trade. We should earnestly carry out such projects as the China-Central Asia natural gas pipelines and the China-Kazakhstan oil pipelines, and push forward the projects of new energy pipelines between China and Russia. We should accelerate the building of major transport projects, including the highway linking western China and western Europe, the China-Tajikistan highway and the China-Kyrgyzstan-Uzbekistan highway. We should effectively operate and maintain the Chongqing-Xinjiang-Europe railway, a recently opened logistics route between Asia and Europe. We should advance regional telecommunications network integration to shorten the geographical distance between Eurasian countries. China will continue to provide financing support for cross-border infrastructure construction.

Fourth, we need to deepen cultural and people-to-people exchanges to enhance friendship between our peoples. We should expand dialogue and exchanges between civilizations, respect each other's cultural traditions and religious customs, and promote mutual learning and harmonious coexistence. We should organize more exhibitions of art and cultural achievement, and translate and publish more fine works. We should send more students to each other's countries, pool resources to build joint universities and strengthen cooperation in human resources training. We should encourage our peoples to visit other Eurasian countries, host diverse activities for people-to-people friendship and facilitate the establishment of more sister provinces/states relations. We should advance friendly exchanges between academic institutions, youth organizations and news media. Stronger cultural and people-to-people exchanges will expand the mutual understanding and common views among the Eurasian people, strengthen their bond of amity and bolster the friendly relations between the countries.

Located in the heartland of the Eurasia continent, Xinjiang has long been the passage for economic and cultural exchanges between China and Western countries since ancient times. It was from here that the Silk Road extended to other Eurasian countries. Today, as China opens up in an all-round way, Xinjiang's geographical, cultural and resource advantages have become more prominent in the course of China's opening up to the west and along the border areas. Last year, the Chinese government upgraded the 19-year-old Urumqi Foreign Economic Relations and Trade Fair into China-Eurasia Expo. The aim is to build a new bridge of friendship and cooperation across the Eurasian continent, lay a new passage for China's opening-up to the west and make Xinjiang a gateway for mutually beneficial cooperation between China and other Eurasian countries. We should make full use of its geographical advantage to develop modes of trade that suit the local conditions, including border trade, border barter and tourist shopping. Xinjiang has 17 state-level open ports and 15 state-level industrial clusters including the Kashgar and Horgos economic development zones. The central government will introduce preferential policies in land, taxation, import and export, infrastructure and other areas in Xinjiang. We welcome enterprises of all countries to come and invest here. We will not only "bring in" investment, but also encourage Chinese enterprises to "go global," expanding investment in Eurasian countries. We will explore the possibility of setting up a China-Central Asia economic cooperation fund and an agricultural cooperation fund and building several economic cooperation and trade zones and agricultural demonstration centers in neighboring countries. Xinjiang's reform, opening-up and development will not only benefit people of all ethnic groups in Xinjiang, but also bring more development opportunities to Eurasian countries.

There were no ready roads in the beginning; they were created through persistent effort by the trail blazers. Two thousand years ago, our ancestors overcame numerous hardships and blazed the world-famous Silk Road. It represents a glory shared by all Eurasian people. In the new century, Eurasian countries and peoples should draw strength from our historical heritage and, in the same pioneering spirit of our ancestors and with greater confidence, proudly assume the responsibility entrusted by history and work together for new glory of the Silk Road and a better future of the Eurasian people.

In conclusion, I wish the second China-Eurasia Expo and Economic Development and Cooperation Forum a complete success. Thank you. 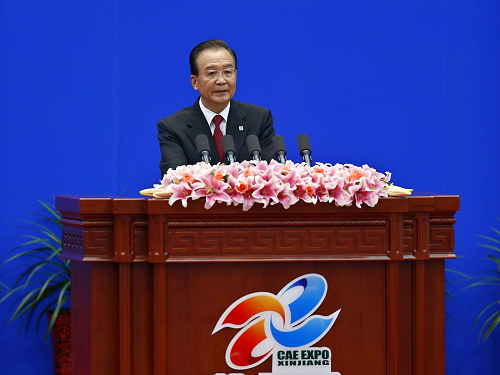 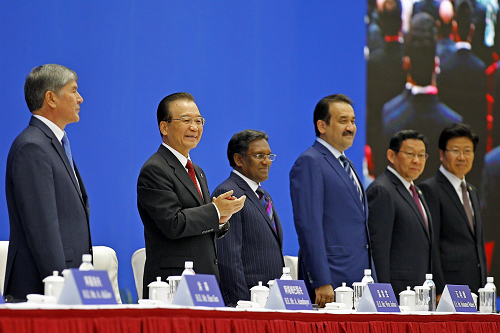 (All information published on this website is authentic in Chinese. English is provided for reference only.)